Comparing Arkansas’ total non-farm employment to the U.S. indicates the State is performing better relative to the U.S.  The chart below graphs the natural logs of the monthly values for each series normalized to January 2015. Normalization to this date reflects the relative performance beginning when Governor Hutchinson took office.

Arkansas non-farm employment growth rate dipped a bit in mid 2017 and again in January 2019.  Now, both the US and AR normalized employment have tanked.

The Bureau of Labor Statistics updates the State’s employment mid-month following the end of the previous month.

SOURCE: FRED, US – PAYEMS, ARKANSAS – ARNA and the author’s calculations

The graph shows the lottery revenues experienced steady growth from January 2017 thru September 2019 and then declined until March 2020 when it began to increase.

The forecasts show a pattern of a continued slow decline thru June 2021.

The following graph shows the June 2020 forecasts for net revenues by month and the upper and lower 95% confidence intervals around each forecast.

Note that the upper and lower limits are wider surrounding the June 2019 forecast made in July 2018 compared to the much narrower limits surrounding the June 2019 forecast made in May 2019. The wider vs. narrow limits reflect that the equation for the confidence intervals for the forecasts 12 months ahead made in July 2018 includes the number 12 while the formula for one period ahead made in May 2019 includes the number one.  Hence, the farther ahead the forecast the greater uncertainty as evidenced by the wider confidence limits. 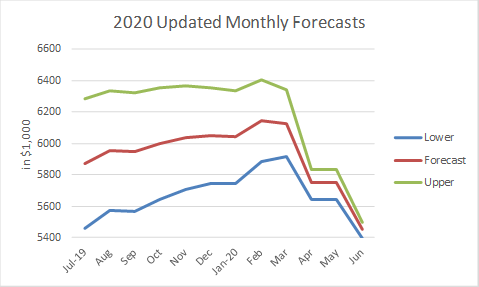 The graph above shows the monthly forecasts slowly  increasing from July 2019 until March 2020 when the decline began and continues thru the end of the fiscal year in June.

The monthly updates for the forecast net revenue collections using data ending the previous month are:

Monthly revisions for the forecast for 12 months ending June 2020:

The graph shows the New Private Housing Units Authorized by Building Permits: 1 – Unit Structures for Arkansas, not seasonally adjusted. The series exhibits significant variation and is highly seasonal with November and December permits significantly lower that the other ten months.

The updated forecasts thru March 2021 are shown below.

Note that the autumn seasonal downswing is underway. The summer peak was slightly higher than previous summer peaks.

The U.S. Bureau of Census updates this data series approximately 45 days after the end of the month.

US and ARKANSAS LEADING ECONOMIC INDICATORS

The Federal Reserve Bank of Philadelphia produces leading indexes for each of the 50 states. The indexes are calculated monthly and are usually released a week after the release of the coincident indexes. The Bank issues a release each month describing the current and future economic situation of the 50 states.

The leading index for each state predicts the six-month growth rate of the state’s coincident index. In addition to the coincident index, the models include other variables that lead the economy: state-level housing permits (1 to 4 units), state initial unemployment insurance claims, delivery times from the Institute for Supply Management (ISM) manufacturing survey, and the interest rate spread between the 10-year Treasury bond and the 3-month Treasury bill.

A time-series model (vector autoregression) is used to construct the leading index. Current and prior values of the forecast variables are used to determine the future values of the index.

The following chart graphs the index for AR and the U.S.  Note that most of the time the AR index is lower that the U.S.  Furthermore, the AR index exhibits a downward slope since it peaked in September 2015. A slight uptick in the AR index is evident beginning in early 2019 but has recently declined.

Note the divergence in the two indicators. 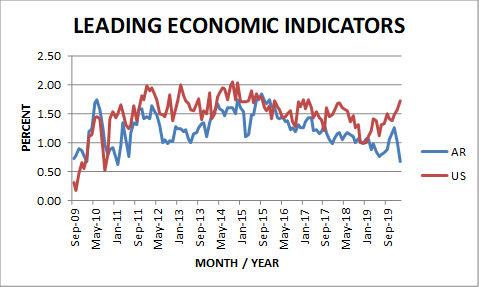 The chart below shows the monthly indices for the U.S. and Arkansas in natural logs normalized to January 2015. The data are normalized to this date to reflect Governor Hutchinson taking office.

The important conclusion is the normalized leading indicators suggest a significant divergence between the two, and both are forecast to decline. 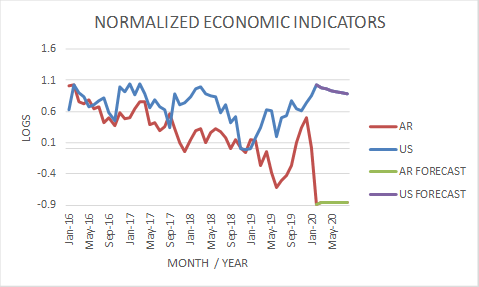